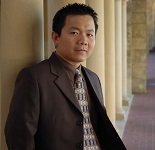 Duc Hong Vo is a Professor of Applied Economics and Finance. He has been working at the Australian Energy Regulator in Melbourne from 2017. He had been working at the Economic Regulation Authority, Perth, Australia from 2008 to 2016 as the Head, responsible for Research and Modelling Branch. Duc has been appointed as an advisor for the Financial Markets and Services Research Centre at Edith Cowan University, Australia. He is currently the Head and Executive Director of the Business, Economics & Resources Research Center, Ho Chi Minh City Open University. Prof. Vo is the chairman of the “Live for A Reason: Supporting Disadvantaged Kids to Schools” Foundation.

In terms of research, Duc has attracted more than VND 4 billion (equivalent to approximately AU$250,000) over the last 5 years. Findings from his research have been published more than 30 times in high-quality international journals, which are indexed by SSCI and/or Scopus and have a very high impact factor, including top journals such as The Journal of Economic Surveys; Journal of Intellectual Capital; North American Journal of Economics and Finance; Applied Economics; Energies; Economic Systems; The Journal of Asian Economics; Journal of the Asia Pacific Economy; Applied Economics Letters; Annals of Financial Economics; Journal of Risk and Financial Management; Economics Bulletin; Emerging Markets Finance and Trade; and Economic Papers. Duc has also published more than 30 articles in leading journals in Vietnam and has presented, including as the keynote speaker, at conferences in the United States, the United Kingdom, Australia, Japan, Spain, China and Vietnam.

Duc’s current research interest covers a range of topics from corporate finance, international finance and public finance, including cost of capital; market and credit risks; fiscal federalism; energy; financial integration and inequality. He has also acted as an editor for various international journals as well as Vietnamese journals.

Dr. Duc Vo was awarded a Doctor of Philosophy in Business and Economics in 2008 by the University of Western Australia (UWA), one of the best universities in Australia, the World’s Top 100 Universities. Duc’s Ph.D. study was sponsored by the Australian Government’s prestigious scholarship (the International Postgraduate Research Scholarship) and the UWA’s Postgraduate Awards. Duc was also a recipient of the UQ-VNU scholarship to complete his Master’s studies at the University of Queensland (UQ), Australia, the World’s Top 100 Universities. He was the best performing student in academics and the Rector’s Honor Roll at University of Economics Ho Chi Minh City, Vietnam in 1993-1997 cohorts.

Dr. Duc Vo can be contacted at duc.vhong@ou.edu.vn